There is a reason why so many artists flock to Provence for inspiration – whether it is to capture its beauty through a paint brush or poetic prose, I now know why. The tall cypress trees, shimmering valleys, countless vineyards, endless fields of lavender and sunflowers, the daily markets, and of course the hilltop villages. Yes, the secret is out…Provence is beautiful. 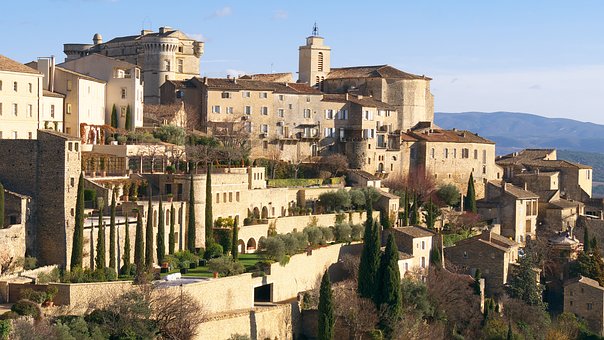 Most Beautiful Villages of France

Part of its popularity, aside from its reputation of having 300 days of sunshine throughout the year, is due to the prestigious title of Les Plus Beaux Villages de France or the Most Beautiful Villages of France. Currently, there are 157 villages spread across France that get to claim this title. To be deemed Les Plus Beaux Villages de France, it considers the size (maximum population of 2,000 inhabitants), the number of protected monuments of historical significance (at least 2), and yes of course, its attractiveness.

It began as a way to protect and promote the heritage of communities and villages across France in the early 1980s. A way to rejuvenate these small villages – making them attractive places for locals to live and stay rather than moving to bigger cities. It worked! It also captured the interest of the tourism industry.

Many people, me included, plan their itineraries around visiting Les Plus Beaux Villages de France. So, when I decided to visit the region of Provence-Alpes-Côte d’Azur, I immediately knew I wanted to go to the heart of Provence, the department of Vaucluse, as it has the greatest number of Les Plus Beaux Villages de France, which has 7 of these villages all in close proximity to each other.

This is very tiny, yet pretty village, has a fair number of ancient picturesque streets perfect for wandering. Built on a small rock formation, all the buildings are made of the same pale beige colour stone and feature ancient doorways. There are an abundance of flowers and gardens spotted throughout this village. This sleepy village offers wonderful Luberon valley views and is perfect for photography lovers and garden enthusiasts.

This hilltop photogenic village offers one of the most stunning panoramic views of the Luberon valley. The buildings of pale beige or gray stone spiral around the rock on which the village stands. Walk along the ancient cobblestone streets next to the soaring high stone houses with their pale blue and mint green shutters. It is popular for a reason.

This village sits on a level plane and is nestled in the middle of vineyards, olive groves and almond trees. It features a charming town centre with some lovely old fountains throughout. It has so many delightful little shops and boutiques, as well as, restaurants and café, all of which I loved. It’s hard to describe, but this village, just made me happy. It has an enchanting feel to it.

This hilltop village is surrounded by glorious uninterrupted countryside views. Wander the wonderfully narrow cobblestone streets winding up and down between the lovely old buildings. You can just sense the history here, from the ancient fortified wall and towers, a beautiful sundial etched in stone or the faded wall signs that are barely legible. I found this village incredibly romantic, and best visited later in the day.

This village is situated in one of the largest ochre deposits in the world and is surrounded by magnificent red cliffs, ochre quarries and lush green pine trees. In contrast to the other villages in Provence, this one is so vibrant and colourful with its red stone buildings and brightly coloured painted shutters and doors. It is wonderful to stroll around in this picturesque village through its small maze of streets.

This picturesque little village is situated in the famous Côte du Rhône vineyards which is the most northern part of this area. It lies at the foot of a hill topped by the ruins of its feudal chateau. Roam the ancient medieval streets and admire the historical monuments at every turn. Be sure to visit one of the many local wineries while in this area.

This very small, quiet and peaceful village is situated above the Nesque valley full of cherry trees. It is believed to be one of the oldest villages, making any history lovers’ dream. There is a small tourism office which will guide you through the village’s well-preserved sites, otherwise, they are not open to the general public.

This once quiet region is no longer a hidden gem. In part, due to the prestigious title of Les Plus Beaux Villages de France or the Most Beautiful Villages of France. But also, Peter Mayle’s famous book, A Year in Provence, brought a flood of tourists to this area. There is no denying that this is a pretty special place. One that I don’t mind keeping all to myself.

First Timers to Nice – Top Things to Do

The Perfect Escape While in Paris: Île Saint-Louis

Hello. I am Renee,  otherwise known as The Holidaymaker. I am a Canadian girl who is bit of a daydreamer, planner and experience collector.

This is my travel journal encompassing over a decade of travel across Europe, and, closer to home in Canada.

I hope to inspire your next holiday by sharing my recommendations of the best places to go, stay and things to do.