Garmisch-Partenkirchen is a great place to explore southern Germany. Located on the border of Germany and Austria, Garmisch-Partenkirchen is the quintessential Bavarian town. If you love the mountains, then this is the best place to be! Germany’s highest peak, Zugspitze, towers over this alpine town. Expect this area to be a popular spot for sports enthusiasts all-year round with world-class skiing in the winter and spectacular hiking and biking in the summer.

With a rich history, culture, and natural setting, along with many great day trip options, here are the top things to do in Garmisch-Partenkirchen.

Grüß Gott, or God Greets you, is the common greeting you will hear in this region. Garmisch and Partenkirchen were once two separate towns. They joined to become one shortly before the 1936 Winter Olympics. Garmisch-Partenkirchen, known as Ga-Pa for short, has two distinct feels still to this day. Garmisch, in the west, is trendy and urban. While Partenkirchen, in the east, retains its old world Bavarian charm.

Local Bavarians are very proud of their culture and traditions. Expect the majority to wear lederhosen (for men) and dirndl (for women). If you find yourself on the trails in the mountains you likely to hear the echo of alphorns being played and yodeling in the local beer hall. It’s all part of the quintessential alpine experience.

Top Things to Do

An absolute must is to visit Germany’s highest peak – Zugspitze at 2,962 metres. Popular all year-round with skiers in the winter followed by hikers in the summer – this is one of the biggest draws of this area.

If you are looking to just take in the dramatic scenery at the summit, there are two ways you can do that. Take the Bayerischen Zugspitzbahn, a cog railway or the Gletscherbahn cable car. Or, you may choose to purchase the Zugspitze Round Trip which combines both for the total mountain experience. At the top, the Zugspitzplatt, there is a plateaued area for viewing, for exploring the glaciers and a few restaurants.  Is it worth the high cost of admission? Absolutely! On a clear day you can see up to 250 kilometres away. So, be sure to plan around the weather forecast.

Walk around Lake Eibsee, one of Germany’s most beautiful lakes, and take in the magical views. The deep emerald green colour is incredible. Lake Eibsee is easy to visit either before or after taking the Zugspitze cable car. 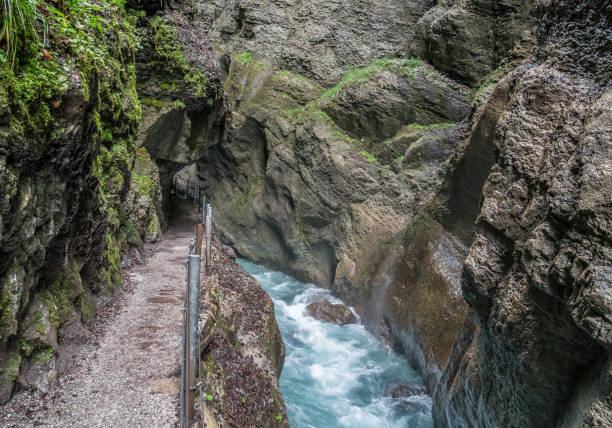 Only three kilometres southeast of Garmisch-Partenkirchen is Partnachklamm, the Partnach Gorge. This dramatic and rocky gorge on the Partnach river is 702 metres long and reaches depths of more than 80 metres.

Just six kilometres southwest of Garmisch-Partenkirchen is another notable gorge, Höllentalklamm. Trails lead to and around the summit of 1,045 metres, including a track that can be followed through numerous tunnels and over bridges to the end of the gorge. 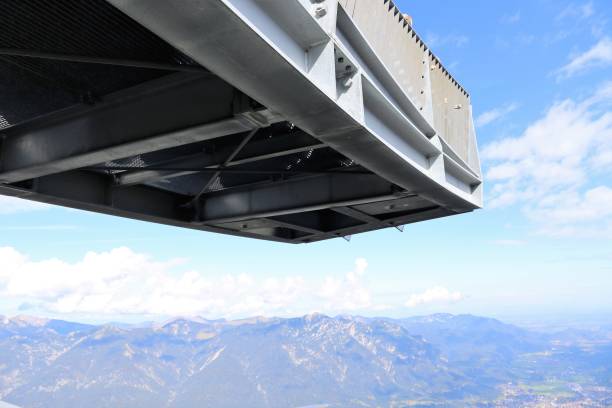 AlpspiX consists of two crossed steel beams that cantilever in an X formation from the edge of a cliff. It allows you to stand in the mid-air, atop a vertical drop of about 1,000 metres. Here you will have panoramic views of Alpine peaks: the Zugspitze, Waxensteine, and the impressive Alpspitze north face. Plan your visit and combine it with visiting Zugspitze as it is in close proximity.

The old town of Ga-Pa, found on Ludwigstrasse, has picturesque half-timbered houses. Most of the houses feature murals which are typical of the area, particularly along Frühlingstrasse. Look out for the Biedermeier frescoes on Gashof Husar and Polznkasparhaus, these are some of the oldest and most beautiful buildings in the town. Leisurely stroll the unique shops and cafés and enjoy the Gemütlichkeit – which is a German saying for cozy, friendly atmosphere.

Is there anything better than seeing a church steeple set up high in the mountains or deep in a valley surrounded by the Alps? These three churches are the most charming you’ll want to seek out. The New Parish Church, also known as St. Martin’s, rises from Ga-Pa to touch the sky. Built in 1733, it has an intricate Baroque interior.  Alte Pfarrkirche translates to “Old Parish Church,” as it should with an origin in the 15th-century. Go inside and admire the Gothic wall paintings. Meanwhile, St. Anton, a pilgrimage church, offers the best of mountain landscapes outside and heavenly ceiling paintings inside. On the building itself, impressive pastel frescoes are featured. It dates back to 1704.

Biking in the Alps

Venture out and explore the Zugspitze region on bike. Yes, that’s right! Rent an electronic bike and you can travel long distances, even up steep mountains almost effortlessly, leaving you free to enjoy the sights and scenery along the way. Pedal through the picture-perfect countryside and discover the uniqueness of the local culture and nature that make the Bavarian Alps so popular. E-bikes are available for rent at many places throughout the region. 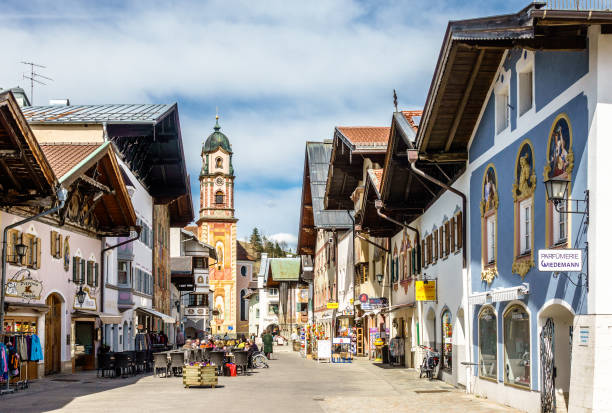 This quintessential Alpine town is only 15 minutes from Ga-Pa.  The entire area surrounding is known for its incredible hiking and trekking trails. Here you will find cute painted houses with flower boxes, fields of wildflowers, mirror lakes and even some waterfalls. Take a stroll through this tiny town and rest at one of the delicious cafés.

This fairy-tale town is only 25 minutes from Ga-Pa.  Since 1520, Oberammergau has celebrated the art of wood carving. Spread throughout the small town you will see evidence of this amazing handicraft. Another prominent feature of this town is the sight of the frescoes in the Parish Church St. Peter and Paul, as well as the Lüftlmalerei the mural paintings adorning the town’s buildings.

This iconic castle is one hour from Ga-Pa. Set on a rock cliff against the backdrop of the Bavarian Alps stands the fairy tale Neuschwanstein Castle. Construction of the castle for Bavarian King Ludwig II begun in 1868, but it was never fully completed. Built and furnished in medieval styles but equipped with the latest technology of the day, it is the most famous castle in the world.

Germany’s third largest city, is only an hour away. This city is brimming with attractions that could keep you busy for weeks. If you are there for a day, try and catch the city’s highlights, including the historic square of Marienplatz, Frauenkirche, Residenz, and the English Garden.

Yes, only an hour away is Innsbruck! All around, towering over you, are the mountains. The jagged rock spires of the Nordkette range are incredibly majestic and are your backdrop for this beautiful alpine town. Being surrounded by ski slopes during the winter and mountainous hiking trails during the summer makes this a must-see destination for any adventurous traveller. Visitors to Innsbruck will be treated to a fairy tale old town chock-full of 13th to 14th century Baroque and Gothic architecture. This magical place makes for the perfect day trip.

Garmisch-Partenkirchen is the perfect base to experience everything this area has to offer. This is not simply a day trip destination, plan to spend at least a weekend at minimum to all that the region has to offer.

Click here to plan your trip using Booking.com to fully enjoy your experience!

Disclosure:  As an Affiliate Associate of Booking.com if you click on the link contained in this post, at no additional cost to you, I will earn a small commission if you decide to book. Thank you.

The Ultimate Driving Route through the German Alps

Hello. I am Renee,  otherwise known as The Holidaymaker. I am a Canadian girl who is bit of a daydreamer, planner and experience collector.

This is my travel journal encompassing over a decade of travel across Europe, and, closer to home in Canada.

I hope to inspire your next holiday by sharing my recommendations of the best places to go, stay and things to do.